In honor of this spooky month, I want to sprinkle a little terror into a few entries until Halloween. Nothing shocking, just a few nods to what makes Halloween fun for me. I know I touched on that a few entries back, but now is the time to start setting out jack o' lanterns and ghosties.

My first macabre monograph concerns a TV show from the 1960's... picture if you will a TV screen in black and white...

... you are now entering...THE TWILIGHT ZONE! 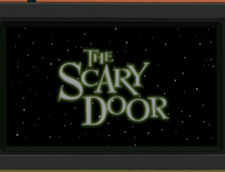 I grew up watching The Twilight Zone. I will never forget going to my Aunt & Uncle's house one Thanksgiving and being upstairs with my cousin, Kison. He was watching the marathon on TV and recording the episodes to videotape. My brother and I took it all in. There's one episode that I remember more than all the others that day: "The Hitch-hiker". That was the single scariest thing from my childhood, well, besides the horrifying poster of CRITTERS that was stuck in a corner of our local Video Rental place. I didn't understand this at the time, but I loved the ambiance that the show gave off. It wasn't gruesome, it wasn't shock, it was smart. That one viewing of the Hitch-hiker gave me chills for years. When I got into High school I saw TWILIGHT ZONE: THE MOVIE. It's a retelling of  classic episodes and includes Dan Aykroyd's scariest role ever (except for the Britney Spears' movie, Crossroads). I'd watch the show if it happened to be on and enjoyed it with my family members. When I discovered Richard Matheson's writing, I re-discovered Twilight Zone. After riding Tower of Terror the other day and appreciating a few of the hidden references in the ride, I thought; why don't I take you through a few of my favorite episodes? Creepy little numbers that make you wonder sometimes if you've ever visited the Twilight Zone yourself.

I had to start here of course. My first memory of Rod Serling's narration. Nan Adams is traveling from Manhattan to Los Angeles on vacation. She keeps seeing this pesky hitch-hiker... he never says anything but he's terrorizing her nonetheless. He's showing up in places he shouldn't be, always with that unreadable expression. His one line "I believe you're going... my way?" makes you check the locks on your car door next time you head out...

2. The Monsters are Due on Maple Street

I actually read this episode screenplay when I was in Junior High. I hadn't read a whole lot of horror/suspense  at that point in my life, obviously. I know that I craved more of that type of writing! This episode, like so many other Twilight Zones, is an allegory. The show speaks to the evils of hysteria, racism and how quickly we as humans can turn on one another when panic strikes. It was the perfect "makes you think" episode for the family of the 1960's.

Rule Number One: You can catch the devil, but you can't hold him long.

Everyone knows William Shatner's famous line "There's... something...on... the...wing!" from Nightmare at 20,000 Feet. Not as many people remember this great episode where he's a newlywed stuck in a town because of a creepy little fortune telling machine that's complete with a devil bobble head. His character Don, gets sucked into believing that the machine controls his future.

Have you ever wondered why some actresses seem to stay young? Have you ever thought to yourself "Hasn't she been 35 for at least 10 years now?" If you've ever had either of those thoughts, this is the episode for you! It even has some pretty creepy visual effects at the end.

If you were lucky enough to have a pool growing up, like I was, I think you understand this episode a little more. The pool is a place of escape and refuge and imagination to any child. The characters, brother and sister live in a large estate with a huge pool. Appearances are not everything though, they're parents are boobs. Mom is concerned about looking good and Dad only cares about money. While swimming one day, they are beckoned to follow a young boy under the water. The emerge on another side to a Mark Twain-esque island. Here they find out what it's like to truly be loved...

Robert Duvall falls in in love with a miniature at a museum. His family thinks he's crazy, but he returns the dollhouse where his tiny love lives. It's a sweet little story and it's always fun to see a big name movie star have their turn in a Twilight Zone before they were super famous.

Another sweet and not so spooky tale about an elderly couple who live in a future where you can trade your elderly body for a young one. The cost? $10,000 for both husband and wife. They only have half that amount. Who will be young and at what cost?

9. Five Characters in Search of an Exit

It's going to make you feel sorry for the toys you've forgotten about. That's all I'm going to say.

The earth is hurtling into the sun and it's a dangerous world outside for Norma and her landlady, Mrs. Bronson. Water is scarce and people will steal your small supply. Watch as the two women keep each other from going insane in the earth's last days. Maybe it's even a very early version of global warming propaganda. ;)

P.S. You can watch episodes for free at cbs.com
Posted by Unknown at 5:40 AM

My Dad's favorite is "In the Eye of the Beholder." Personally, I really like the one where it turns out that us Americans were aliens invading another planet!